Gianni Ricchizzi was born in September 11, 1954 in Barletta (Italy). He started to study Sitar in 1975 in Benares (India) with Ustad Kursid Ali Khan, a far relative of Vilayat Khan.

In 1981 he graduated in Musicology at the famous Indù University of Benares with Doctor Prem Lata Sharma and Professor Ritwik Sanyal with whom since then he is still studying Dhrupad Music.

In 1985 at the same University, he got his degree of Master of Sitar and Indian Music leaded by great masters like Raj Bhan Singh and Puspa Basu. In that year he was awarded by the same university with the “O. Thakur Award” for having achieved the highest marks in the exams session among the candidates at the 8 years Master Degree. To deepen the study of Sitar he then continued with the Master Amarnath Mishra, one of the foremost exponents of the Benares Gharana.

After meeting the great master of Vicitra Vina Gopal Krishnan, in 1979 he started to study with Him that rare instrument.

Afterwards, in 2002 during the stay in Assisi of Ustad Asad Ali Khan, he didn’t miss the opportunity to be initiated into the study of the Rudra Veena, one of the most ancient Indian string instrument. Also, during his long period of stay in India (10 years) he learned the basis of other string instruments like Surbahar, Santoor, Tanpura, Indian Guitar.

Currently he lives in Assisi (Italy) where he founded the only Center of Indian Music in Italy named "SARASWATI HOUSE" (as devotion to the Goddess Saraswati, inspiration of the musicians and protector of the study and arts) where, for the last 30 years, he promotes Indian Music, inviting important musicians for concerts and workshops.

Some of the most meaningful stages of his musical activity had been: his first concert in India in 1981 organized by the Cultural Institute of the Italian Embassy in New Delhi followed by others in 1983, 1984 (in Kamani Auditorium – New Delhi); he has been invited to perform in many Indian cities.

In 1982 he received the qualification of "Young Light of the Music" from the Sivananda Ashram of Rishikesh.

Very meaningful is the first participation in the 1996 at the Dhrupad Mela, historical Festival of Benares. In January of 2006 he opened at Bhopal, in India, the PRATISHRUTI Exhibition, dedicated to six non Indian musicians who play the Indian Music since long time. Afterwards in Bhopal he was invited to give concerts and workshops of Vina at “Dhrupad Kendra”.

Many of his travels to India were dedicated to spread a better knowledge of the Vicitra Vina in the Dhrupad style, here he performed many concerts and workshops in Bhopal, Mumbai, Kolkata, Benares and Delhi.

He also gave concerts at the Italian Embassy in Rome where he had been invited several times, in Germany, France and Switzerland as well as important international events where he was the only european representative of Indian music. Of particular relevance is the participation at the Festival "Parampara" of Berlin in the 1994 where he played the Vina, the Sitar and the Harmonium. In Italy he gave many concerts in theaters, cultural associations, yoga centers, churches, schools, etc.

In 1987 he participated in the national television broadcasting of "IL MONDO E' TUO" (Rai 1), “INCREDIBILE” (Rai 2) in 1988, and also shows on private tv channels like TeleRegione, TeleBasilicata, Canale 21, TeleLazio and lately T9 and others.

"La Stanza della Musica"(the room of the music) by RADIO3 dedicated to him a full program including an interview in November of 2004.

Gianni Ricchizzi composed and recorded the sound-tracks of some TV documentary as "Italiani in India" on RAIDUE, "Un libro un amico" on RAIUNO, the TV fiction "Sandokan 5" and the film “Natale in India” in 2003. In 2004 he also recorded the music for a documentary about Mother Teresa of Calcutta with Master Luis Bacalov.

He recorded his first CD in 1995 for the English Label “Nimbus Records” for the Master of Indian Music series, the only recorded by a "not indian". Other two CDs were recorded in 2001 (first with Vicitra and the other one with the Rudra Vina) for the German Label “Internal Music”. In 2003 he collaborated with the singer Reba Som for the recording of a CD of Tagore’s Poems. Very interesting had been his collaboration with Master Mannino, who composed the opera "La sinfonia degli oceani"(the oceans' symphony), followed by the one with the composers Toffolon and Cavallin for the performance of the opera "Preghiera per la vita" (prayer for the life) where the sitar played” with the other instruments of the traditional symphony orchestra.

In 2007 “Nomadism Records” published his CD where he accompanies with the Vichitra Veena the Master of singing Ritwik Sanyal. In 2009 there has been a collaboration with the cantautore Sergio Cammariere, with whom he recorded the CD “Carovane”, playing the Sitar and the Tampura.

Among his collaborations there is the performance of poetry of Roberto Cinieri at the Auditorium Parco della Musica of Rome; also the collaboration with gregorian chant at Colosseum. In 2018 there was his concert at Campidoglio for the International Yoga Day.

Until 2011, he was the first to teach Sitar in an academic course of 5 years (with final degree) at the Academy of Music of Vicenza. 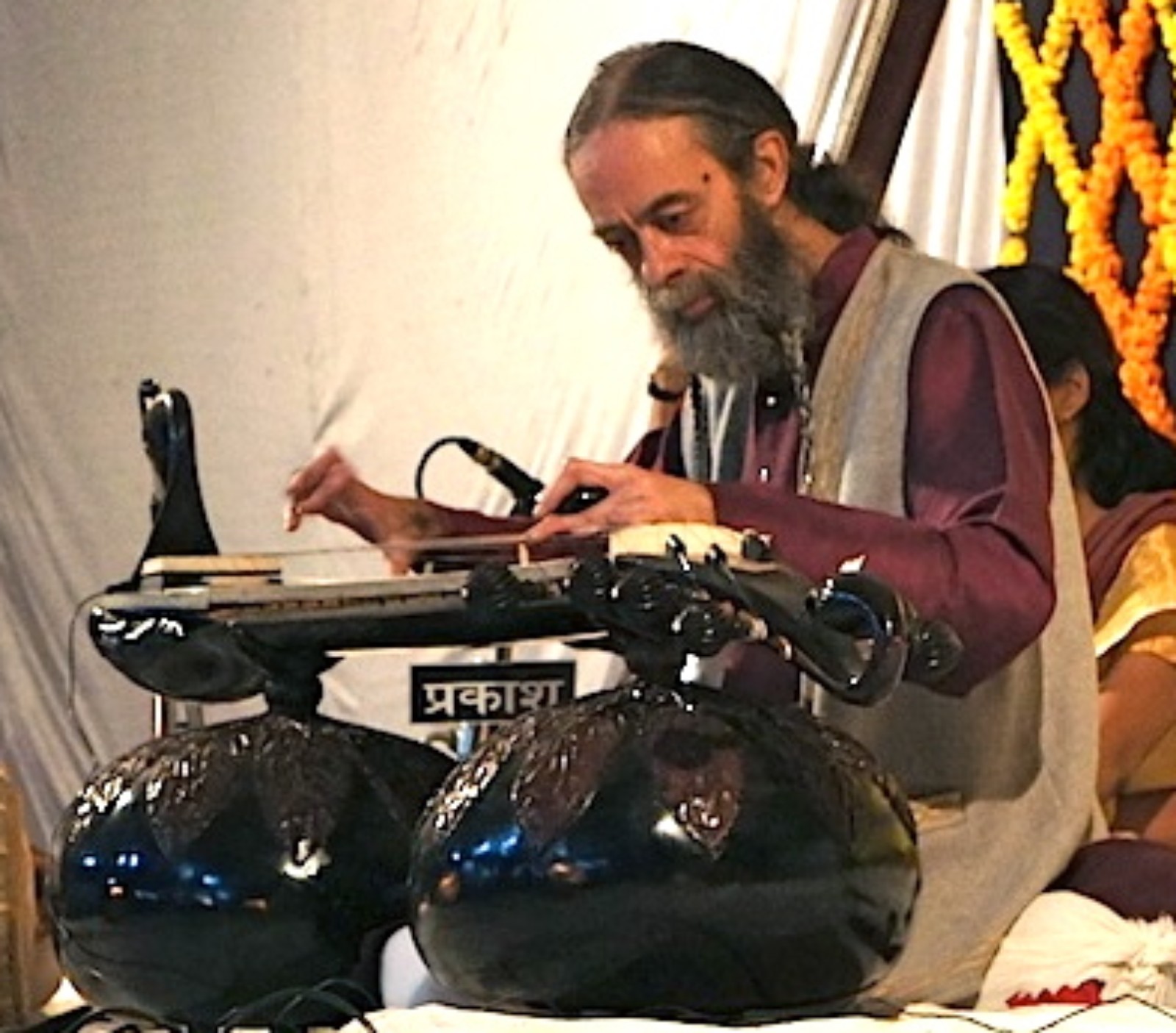 In February 2015 he + received the gold medal for best musician during the famous “Dhrupad Mela” of Varanasi, where he has been the first and only European to be awarded with the “Lifetime Dhrupad Seva”, having played in that occasion twenty years after his first time.

In 2015 was published, after a presentation at the Indian embassy of Rome, his book “108 Raga Mala – Benares e la musica classica del nord India” (Ed. Artemide) the first in italian language for studying the practical aspects of indian classical music and not only theoretical.

In the Dhrupad Mela of Varanasi in 2018, he played the Rudra Veena, being so the only musician ever to play both the Rudra Veena and the Vichitra Vina in that festival.

For further information, about his activities, it is possible to visit the website www.musicaindiana.it and follow his concert’s videos in YouTube and his recordings in Sound Cloud.